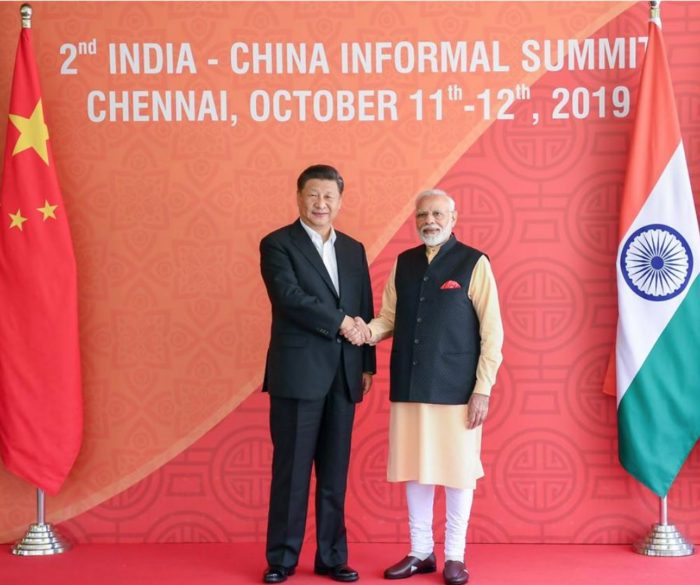 According to Wikipedia, Xi Jinping, President of the People`s Republic of China, the world most influential and powerful leader, is a Bachelor of Engineering (BE), Doctor of Law (LLD) from Tsinghua University. No college or university education background of Prime Minister of India Narendra Modi is mentioned on the Wikipedia page. Xi Jinping having an engineering and a law degree is in a strong position to understand the complex world as compared to Modi who has no formal university education.

China has marvelously developed the infrastructure under the guidance of Xi Jinping since he took over the reign of the government. It is popular in China that Xi Jinping himself review the mechanical engineering drawings when new big infrastructure projects are launched in China. In the case of Narendra Modi such advantage is missing. Modi either has to depend wholly on the Minister concerned or an IAS officers. Xi Jinping has a rich legacy to follow. His wife Peng Liyuan is a folksinger, opera actress, professor, health promoter. She is referred as “Chinese First Lady”. Modi does not live with his wife. As is well known “Behind every successful man there is a strong woman”.

Xi Jinping is a very strong & powerful personality in the world. Due to his good work in China, the larger segments of China especially the elderly population likes him very much. Xi Jinping as a powerful leader does not need to organize Chinese people in the USA, Russia, Nepal, Pakistan to showcase his popularity. Chinese people have established ‘China Town’ in almost all the developed nations of the world. Wherever, Xi Jinping goes he is respected because of China`s economic & military power. In case of Narendra Modi, the RSS people have to arrange people to showcase his popularity. Because of anti- Dalits, anti-Muslims, anti- Chritians, anti-poor policies of the Modi government, Indians settled in the USA, UK have demonstrated against him on the streets of the USA in Houston,  Modi is Hitler, Modi is a murderer, Go back Modi posters were ubiquitous in the towns of  Houston during Howdy Modi in the USA. Rahul Gandhi, former President of Congress Party pronounced Modi as, ‘Chowkidar Chor Hai (Caretaker is a thief) on national television channels in India & abroad. Modi`s world image was severely damaged when Kejriwal, the Delhi Chief Minister questioned Modi`s fake degrees from Delhi University & Gujarat University[i] Xi Jinping having a law degree understands the judicial system in China better than Narendra Modi in India who has no law degree. It is certain that nobody in India will say ‘Modi Will Live Forever in our hearts after his death’

Chiang Kai-shek, Chinese military & political leader inaugurated the New Life movement in 1934. According to Chiang the revolution demanded discipline, which the Chinese people sadly lacked. This was because of the presence of selfishness & the presence of social consciousness. However, the nation could be transformed if the Confucian virtues of li, Yi, Lian, Chi (propriety, justice, honesty & self-respect). From that day onward, China has been progressing by leaps and bounds. Tsien Hsue-shen who studied rocketry in the US returned to China. Two years later, a rocket with an atomic warhead exploded in Xijiang, 1000 miles away. The National High Technology Research & Development in 1955 Programme – the 863 Programme the nation`s major technology development Programme was established & the space Programme accelerated[ii]. Since 1990, China has used the concept of “Comprehensive National Strength” to measure its own strength. Chinese scholars define, “Comprehensive national strength’ as the aggregate of a country`s real & potential power in political, economic, military, scientific, technological, educational & other areas at any given time. It is perceived as a strategic indicator of a country`s stature.[iii] China has made tremendous progress in the advanced technologies. The computer giant Lenovo that bought IBM & the Nanjing car company that bought MG Rover entered the global corporate league. China has become the world’s preeminent low-cost manufacturer, not only of traditional labor –intensive goods like footwear, toys, apparel, and sporting goods, but increasingly of information & technology products, hardware, and electronics (Lardy, 2002a as quoted)[1]. In order to boost up economy, china took several measures and reformed fundamentally old regulations to facilitate the exporters. In order to achieve the intended purpose, China established the Ministry of Foreign Trade & Economic Cooperation (MoFTEC) now known as the Ministry of Commerce (MoFCOM) allowed provincial & even local trade officials to grant foreign trade rights. Today, two provinces like Zhejinag & Gaungdong are the two Chinese provinces that export the most. China has been selling nuclear & missile technologies to Pakistan. China granted $ 1.6 billion in military assistance and moderation funding to Burma[iv]. This step on part of China disturbed India. Burma has already fallen into Chinese sphere of influence.

For developing countries that exchanged colonial rule for the diktats of the IMF & World Bank, the promise of setting their own agenda is the stuff that dreams are made of. As one Nigerian journalist put it:

The Chinese government knows what is good for its people and therefore shapes its economic strategy accordingly. Its strategy is not informed by the Washington Consensus. China has not allowed any IMF or World bank officials to impose on it some neo-liberal package of reforms… their strategy has not been neo-liberal overdose of deregulation, cutting social expenditure , privatizing everything under the sun and jettisoning the public good. They have not branded subsidy a dirty word[v].

China today has by & large resolved its food production problem. China has developed the capacity to feed itself by rapid technological progress. The World Bank estimates that air & water pollution cost China about 3 percent – 8 percent of GDP, while the people`s Daily reckons that environmental pollution causes annual losses of US $ 34.3 billion. The United Nations is becoming a powerful amplifier of the Chinese world –view. Alibaba, Chinese multinational conglomerate under Xi Jinping leadership succeeded in branding the Chinese products China rose to eminence due to planning, vision, foresightedness.

India is the largest democracy in the world. There are hundreds of political parties.  Caste system, political & economic corruption are the major problems that hinder the growth of the country. Modi government claims that the majority of the problems are solved in the last five years but statics reveal that nothing has been achieved. Caste system has been reinforced with the entry of the Modi government. Due to prevalence of the caste system, all the States & Union Territories are politically disturbed. Every day, there is a killing in the name of the caste. Every day, a daughter is burnt due to dowry demand. Despite digitized of the government system, corruption at all levels of administration increased manifold. Not a single file moves without greasing the palms. Government officials have devised new methods to extract bribe from the customers. The Ministry of Commerce & Industry is planning to allow Chinese investors to set up their industries in India. The Minister concerned knowingly wanted to get rid of troubles of the local manufacturers. The litany is that all government Ministers in India are trying hard to sell the country to the foreign investors. The RSS could not stop Modi government and his Ministers to prevent foreign companies to enter into Indian market. The streets protests by the RSS against the Regional Comprehensive Economic Partnership (RCEP) is a sham.

Banks are facing NPAs because the nexus between corporates & political elite class is sucking the banks. Almost all populist schemes launched by Modi government from 2014-2017 are at the verge of closure due shortage of funds. Public Toilets are shut due to no water supply.

Recent Global Hunger Index released by the International Food Policy and Research Institute (IFPRI) shows that India is among the worst performers on the fronts of hunger and malnutrition. According to the National Health Survey (NHS), more than 19 crore Indians are under-nourished or face hunger. The Centre spends about Rs 1.4 trillion a year on food subsidy[vi] . According to Global Competitiveness Index by Geneva –based World Economic Forum (WEF), India ranks 68th.

Under Modi incompetence, export declined and import increased. This imbalance has shook the Indian economy. Now Japanese apparel companies have entered into retail business in India under the nose of the Modi government. How it is happening, the Indian manufacturers must ask from the Modi government. Bansals of Flipkart with the support of BJP`s elite class set up e-commerce companies to sell imported products from China, Bangladesh, Sri Lanka & Nepal to the Indian consumers.  From all this it seems that the Ministers under the nose of Modi doling out licenses to the foreign companies.  In the past five years, Modi government has taken heavy loans from IMF, World Bank to run various infrastructure projects across India. After having loans from IMF, World Bank, Modi government has to agree to its diktats.

NGOs in China only work for the economic & social development of the Chinese and do not interfere in political matters. In India, national NGOs run by Brahmin elite class not only interfere in the political matters but also play a role in the formation of the policies. India could not improve its stand in production of indigenous defense equipments under Modi government.

Xi Jinping and Narendra Modi cannot be on the same page of history. Xi Jinping a highly qualified visionary work under his own terms and conditions. Xi Jinping does not have to follow the instructions from any religious or social body. Modi has to follow Rashtriya  Swayamsevak Sangh (RSS), instructions in matters of national policies so Modi does not have independent mind to exercise for the welfare of the nation. Modi has no planning, no vision, and no foresightedness. Will Modi learn virtues from Confucian?

Dr. Rahul Kumar holds a PhD in sociology from the Department of Centre for the Study of Social Systems, Jawaharlal Nehru University, Delhi. India. He is an independent researcher and senior media columnist. His research & writing interest extend to macro social & political & international affairs. He is working currently with the “The Asian Independent UK” newspaper as a Bureau Chief.  His book on “Elderly Punjabis in Indian Diaspora” traces trajectories of Elderly Punjabi migration to U.K. He is a member of the Editorial Committee of Global Research Forum for Diaspora and Transnationalism (GRFDT) New Delhi. India. The views expressed by the author in this article are personal and do not necessarily reflect the official policy of the paper.

Dalit Assertion and Suppression of Dissent

Why Gopal Kanda is Untouchable to the BJP