English Articles Who will listen to four-month olds?: Dr Aparna 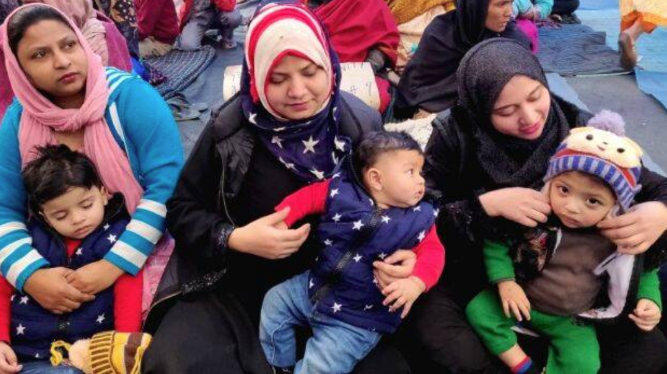 The Supreme Court of India, in all its wisdom, quizzed the mothers of Shaheen Bagh with the query – Can a four-month old decide to participate in a protest?
Dr Aparna, National President, Indian Federation of Trade Unions, penned the following response. You may find it thought provoking.

Who will listen to four-month olds?

* A four month old cannot protest, as the Supreme Court has noted.

*A four-month old can’t be a construction worker either.

For if a baby could, the four-month old might complain to the Supreme Court that despite the law for creches at workplace, the law is unimplemented in 90% sites in the National capital itself. The baby would complain that construction worker mothers lay down four-month olds right within construction sites in all months of the year!

*And the four-month old might complain on how babies are forced by Govts to live under the open air. Delhi’s homeless mothers-they don’t bother! Can a four-month old be out exposed to the vagaries of the weather and sleep on streets? Or can a four-month old accompany the mother to sleep in those shelters under battered quilts and the breath of tens of others around the little babies! The govts have failed to give a right to at least a one room home to every family even 72 years since 1947. But the four-month old can’t protest. The baby can’t complain to the Supreme Court either.

* A four-month old surely cannot protest. If babies could, they would complain about Govts and Courts to the Supreme Court. They take no action against the powerful polluters who dirty Delhi’ air and kill the cells of the lungs of babies. They would reject their mothers’ submissions that they are too poor to exercise the option of leaving Delhi or even using air cleaners. They would refuse to stay in a Delhi where govts or courts give a free hand to real estate owners and car owners and cause irreversible lung damages in little babies.

Who will protest the patriarchy inlaid in the questioning of why a four-month old baby accompanies a mother to a protest? Why don’t they question the unequal economic conditions under which four-month old babies live and grow up? A woman then has no right to work, no right to protest, just because she has no alternative but to carry her baby along?

The Supreme Court is entertaining such a question in the second decade of the twenty first century. Women’s fight against denial to them of support structures by society and against stifling their exercising of democratic rights by demagogic and patriarchal discourse, has a long way to go. Much gratitude to the Supreme Court for pushing us to realize this. We do get the message, only the materially well-endowed women with money to pay for support structures may protest. Only limitedly though, as four-month olds must be breast fed. And four-month olds cannot protest.

Let us strengthen the idea of India and defend our secular...