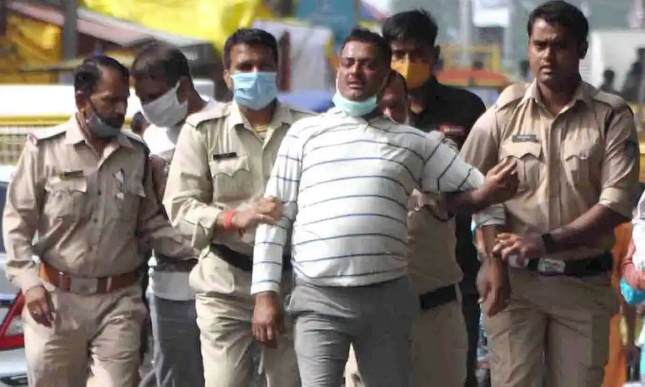 It is strange that suddenly a large part of public opinion is speaking of ‘rule of law’ after the killing of terrorist Vikas Dubey was killed. Ofcourse, for many he was not a terrorist but a petty criminal but then any one who spread terror, kills innocent people whether with political patronage or without it is a terrorist.
However, what is disturbing is the way he has bee killed and police theory is so poorly scripted that any court will trash it to Dustbin.

There are few important points that we find here. Politicians normally don’t care for rule of law as for them public perception is more important. They know it well that in the eye of public they are being treated as heroes. Till the day before, when Vikas Dubey surrendered or caught every on started crying that he was being saved by the top leadership. The thing is that Uttar Pradesh government’s policy is nothing new as these days political leaders, become ‘messiah’ and they use the same police and same methods against which they have been speaking when they are in the opposition.

According to Indian Express report, Vikas Dubey was actually encounter number 118 done by Uttar Pradesh police since Yogi Adityanath took over as chief minister of the state. Police are supposed to follow law but when the top leadership allow police to do things at their whims and fancies then such things are bound to happen. It is reported that in 74 such cases magisterial inquiries have given police clean chit and 61 cases have been closed. When encounters become state policy then you cant expect independence and autonomy in such magisterial inquiries.It is time for the High Courts or Supreme Court to ensure that such things dont happen and though there are specific court lines yet better that they are renewed and spoken powerfully.

It was perhaps this fear of custodial encounter that forced a lawyer in Mumbai to approach the Supreme Court just before Vikas Dubey was killed. The thing is that none would weep for Vikas Dubey and his kind of goons but the people who swear by the constitution have to follow the constitutional procedures. We know police remain under deep strain when political leadership use them and that is why we have seen emergence of caste goons. So my caste goon is a revolutionary for me but a goonda for other and vice versa. This has happened in Uttar Pradesh and Bihar where politics was and is openly influenced by this culture. Today, all the political parties are saying this but there is this fact that state need police and politicians need them more than any one else to protect them. Caste identities and loyalties are so powerful here that even the policemen who have to take action against the goons actually bow before them and the thanedar of the Chaubepur thana was not exception. These are harsh realities of the state. I can give an example how the goons are protected and supported in India and how do they behave if they are out of the country.

Nearly twelve years ago, I was returning from London after participating in a conference. I boarded the British Airways flight from London Heathrow. It was Middle seat which was offered to me. The time was 10 am in the morning. When I boarded the flight, I saw a man sitting on the seat in a typical village style. He had put his feet too on the two other seat which were vacant that time. I did not say anything and sat silently. There was a gap of two seat between this man and me. Soon, he just stretched his leg further and pretended as if he is sleeping so that none ‘disturb’ him. This is a normal trick of Indian men who dont want to vacate a seat for some one or dont want to listen to any one. I was very upset. Soon there was the usual announcement for fastening the seat belt and other things before take off. The man did not bother. The hostess found him and ask him to fasten the sit straight and fasten the seat belt.

After some time in the air, the crew give the immigration form to all. Unlike these days, immigration forms had to be filled by all whether Indian national or foreign national. I filled it up soon and kept quiet. This man was trying to speak to me but I was deliberately ignoring me. After some time, he asked me whether I have a pen ? I said yes and gave him the same but he was not asking for the same. He wanted me to fill his immigration form and that of his family, in all about four passports. I told him that I will do one sample for him and he should do the rest.

So, he gave me his disembarkation form and passport. As I opened the first page, I got the first shock. This was a well known mafia of Uttar Pradesh. I kept my composure and pretending as if I don’t know anything. I filled the form and gave it to him. I kept quiet. Soon, he started a conversation with me. ‘ Where do you live, he asked me ? I said, in London ? Oh, what a great country is this ? Every body follow law and there is no need to have police. I asked him where was he coming from and he said that he and his family were on a vacation and traveled to United States. He was admiring the western world, about the discipline and cleanliness there and wished if things were same in India. I asked him, what do you do ? ‘ I am a social worker’, he said. I laughed in my heart.

Through out the journey in the air, he was silent and did not utter anything. He could not fill the disembarkation form and kept them pending. As the flight landed in Delhi, his ‘power’ return. While I remain waiting for my time at the immigration, he got a VIP treatment and got away with everything quickly. Normally, it happen to all the VIPs who return, even the children of these VIPs when they return to India where their junior staffs are there in service of their lords. I was not shocked to see that as it is a reality.

The big dons have political linkages as well as with policemen too. Media will come with selective leakages. They will bring a BSP-SP connections to the goons but that is not the complete story. It is like Bollywood films where a Dubey, Tiwari, Sharma are always ‘do-gooders’ and a Yadav, Gujjar, Thakurs are always the villain. An honest effort need to be made to expose the nexus and all political parties will have to take a pledge that they wont use these dons for their political purposes but that is not easy.

Perhaps we need a strong response from the Courts ( may be we are expecting too much) as political system is failing. We know that many people will ‘celebrate’ but rule of law can not celebrate this. A live Vikas Dubey would have been more powerful than the dead Vikas Dubey and the reasons are clear. In terms of politics, Yogi Adityanath remain powerful but whether there will be resentment among Brahmins or not will be seen in the coming days but he can claim that he will not ‘leave’ any criminal which ever caste they belong to but before that his police will have explain the court that the ‘encounter’ was genuine. Politically, there may not be much damage to his image but in terms of legality and constitutionality, whatever has happened has only damaged rule of law further. You can now allow the police to function in such a way. Moreover, in the absence of Vikas Dubey, who will spill the beans of who funded him as well as who used him for their nefarious political purposes. Clearly, the police might have killed and satisfied the feelings of those families who lost their near dear ones but then beyond that it remain a blank spot. We need to believe that it is important to reach to the heart of an issue and find the truth and for that faith in constitutional system is a must otherwise it is assumed that goon is killed to protect more powerful on whose behest he was doing his killings. Will the truth be out now ?

Priyanka Chopra is gripped by wanderlust

Strengthen the idea of Inclusive India to defeat forces trying to...

Who is responsible for destroying magnificent Buddhist places of learning in...

18/02/2020
We use cookies to ensure that we give you the best experience on our website. If you continue to use this site we will assume that you are happy with it.Ok