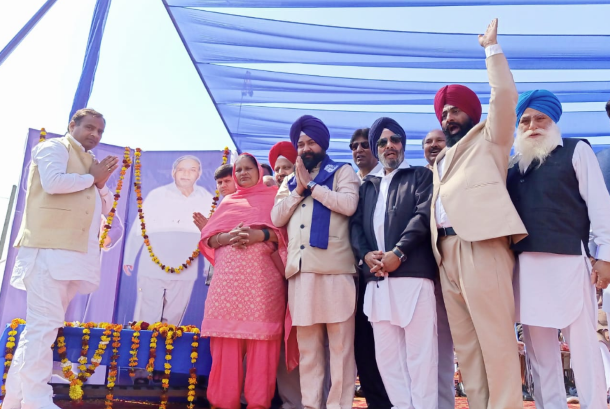 Chandigarh / Ropar 15 March – Bahujan Samaj Party Punjab today celebrated the 86th birthday of Shri Kanshi Ram Ji, the founder of BAMCEF DS4 and BSP in his native village Khawaspura, near to Ropar. In this State level railly, thousands of BSP workers paid their respects and pledged to take power in 2022. The entire city and pandal were decorated with blue flags to give a grand appearance to the railly. On this occasion, the chief guest BSP Punjab and Chandigarh in-charge Mr. Randhir Singh Beniwal, Mr. Vipul Kumar and Mr. Kansi Ram ji’s sister smt Kulwant Kaur reached. The rally was presided by the state president, sardar Jasvir Singh Garhi and the state general secretary Nachtar Pal organised the stage.

Addressing a large gathering of thousands on the occasion, Shri Randhir Singh Beniwal said that Punjab and the coalition governments of BJP and Congress have been badly looted and beaten for the last 70 years. The youth and farmers of Punjab have been devastated and Punjab has been pushed into the flood of drugs. The entire employees of Punjab is so distressed that teachers and other employees of Punjab are being forced to jump into the canals and climb the water tanks. Governments have been pushed into the clutches of farmers, poor laborers, merchant into the web if loans. Students are excluded from the education of colleges and universities. Shri Beniwal further said that the key to the solution of every problem in Punjab lies with the BSP, which has the experience of running the government four times in the country’s largest state Uttar Pradesh. After Behan Kumari Mayawati ji, Sahib Kansi Ram ji is making sincere efforts for change of power in Punjab.

Speaking on the occasion, Shri Vipul Kumar Incharge BSP Punjab said that the ruling governments in Punjab have always pushed from the backward classes and till date the Mandal Commissions report has not been implemented to give backward classes their due rights in the field of jobs and education. Mandal commission report gives 27% reservation to OBC classes. He invited the people of Punjab to change power in Punjab in 2022.

Punjab state president and youth leader Sardar Jasvir Singh Gadhi said that BSP is the third largest party in Punjab in terms of votes after Congress and SAD-BJP alliance. The BSP’s organization extends to the assembly level all over Punjab and trying to reach at booth level. The BSP is making a planned struggle to expand its mass base as per the guidelines of behan Kumari Mayawati ji in Punjab and by 2022 unlimited access to all classes at grass root in Punjab will be achieved. Because in the country and state Dalits, peasents, students, farmers, small traders and people of every class are troubled and suffer from economic recession and loot of governments. He said that Congress government has failed on the law and order issue and did not succeed in curbing drugs. Unemployment is at its peak in Punjab. Employers seeking employment are jumping into the canal and educated young generation is leaving the country suffering from government policies and drug addiction. Shri Garhi said that the people of Punjab have appealed to cooperate with the BSP for the future of Punjab. Taking a jibe at other political parties’ desire to gain power, he said that this time in 2022, there will be no government in Punjab state except BSP blessings. He further said that an atmosphere of chaos is being created in the country. NPR, CAA and NRC As black laws are being brought. The law and order of the country is not under control, the people of the ruling party are working to provoke riots. He slammed the government for not implementing the post matric scholarship properly and demanded immediate relief to the students and demanded immediate implementation of the 85th Constitution Amendment.