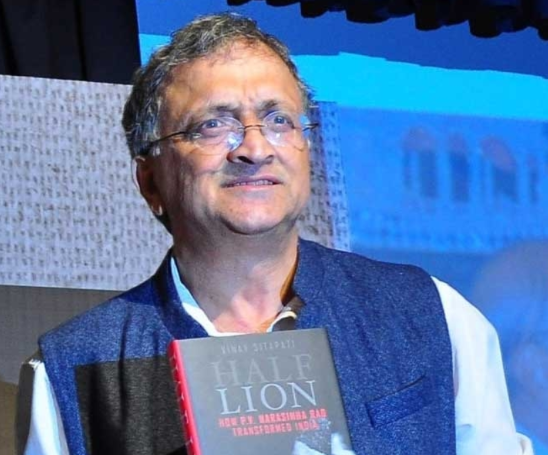 Ramchandra Guha is quite dangerous and ‘expert’ in balancing thing. His problems with Congress are manifold but many ‘experts’ feel that if they criticise the Sangh Parivar, it is their duty to criticise Congress more than them. Ram Chandra Guha has done that in past. I dont know why Rahul Gandhi should come in picture. Does he not has a right to be in politics. Has he not been out of power since he started his career. In democracies there are no dynasties but political families and it is upto people to reject them but to term the decision of Wayanad people electing Rahul Gandhi as wrong, Guha shows his absolute disrespect for people’s understanding. Can he suggest that Gujarat state is wrong since 2002 by electing BJP or people of India were wrong in giving two terms to Narendra Modi lead NDA. We may disagree but to suggest that it is wrong decision of the people is to ignore various other factors which are important during an election campaign.
Guha’s views are not different than that of Yogendra Yadav who wish that Congress must be finished. Why and how. What is Yadav’s alternative for that. If you all want to finish Congress then please do whatever at the political level and not through wishful thinking. Many people wanted BSP to die and many other were thinking Samajwadi Party to die so that they can become leaders through TV channels and their appearances at Jantar Mantar.
Congress like any other political party has its own problems and failures and none said that we cant discuss that. But it would be a deeply ignorant thought if some people think that they can build an alternative to BJP and Hindutva without engaging with Congress and other mainstream parties. Those who were part of Anna’s movement to build up a ‘national alternative’ of the Congress will only help the Sangh Parivar which was never that powerful as they are today.
This backroom politics wish to make a Chandrashekhar Azad, an alternative to Mayawati and BSP so if he is pitched in UP, he is not going to damage Yogi Adityanath but only to BSP and to some extent Samajwadi party. My submission is that it is time when people’s movement must grow and ensure that all these parties be secularised and democratised. I dont say they are not but they remain under various compulsion because we as an opinion makers in the name of secularism only produce the brahmanical dirt. The parties must address the issue of youth and ensure they have fair representation but to think that a few individuals who get hundreds of likes and are on Ravish Kumar’s show or on India Today, will be the alternative to BJP  is living in fool’s paradise. If these channels are making a Kanhaiya or a Jignesh or a Chandrashekhar a national alternative without ground work at the grassroots and not through these events then, the channels have one agenda which is to confuse the people and kill the opposition through these entities. More over, if we want to fight against Modi or BJP’s highly individualised campaign, it is time we develop and build leadership of collectives and not Americanisesd presidential model. A hugely diverse country like India can not survive with three or four brahmanical parties. It need representation at different level and attempt to homogenised it must be opposed. India has space for secular, democratic, socialist, Bahujan parties and the only way to succeed is to build up a coalition of these diverse groups and that coalition must not be done in a hurried way but must be a permanent thing with common minimum programme where the parties can have a national agenda and a separate agenda or CMP for their state.
Oppose the politics of individuals and build up a collective strength and yes we dont need all the good people in politics to get corrupted we need political people outside the power politics too to speak up courageously without fear or favor so that the those in power listen and mend their ways. The current lot of movements against CAA and NRC has shown the strength of our youths and women who are ready to come to the street and speak up their mind that they want freedom from all kind of regulations but to think that all of them will be fodder for a new political party is dangerous. Please use their positive energy to remain alert and vibrant against any form of tyranny and oppression.
Let political parties read and understand what people want and this provide a great deal of learning for them but please dont tempt yourself to make another ‘national alternative’ because you are visible on a TV programme. Our journalists whether this side or ‘that side’ are just mouth pieces and have prejudiced minds and can be fatally wrong in understanding people’s mood. The only way to fight and win against the current dominating politics is to accept that India is a social-cultural coalition and build that up at both national, regional as well as community level to make the coalition a permanent feature of our politics. Any party which ignore this reality is bound to be doomed. It is the quintessential coalition nature of India and its understanding which will ultimately ensure defeat of those who wish push their narrow tainted agenda on India.

Trump will remember warm welcome from UP for long: BJP

19/01/2019
We use cookies to ensure that we give you the best experience on our website. If you continue to use this site we will assume that you are happy with it.Ok