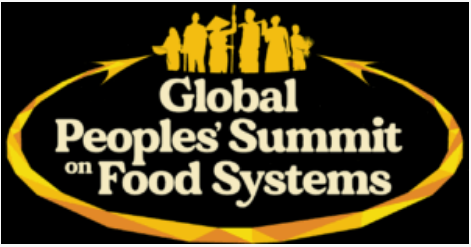 (Samaj Weekly)- On the occasion of World Environment Day, June 5, people’s movements and civil society organizations around the globe today launched the Global People’s Summit (GPS) on Food Systems, a counter-summit to the UN Food Systems Summit (UNFSS) slated to be held later this year. Organisers of the GPS are among the hundreds of CSOs and indigenous peoples organizations who have previously voiced criticisms of the UNFSS for its ties to big businesses and exclusion of small rural food producers.

“This year’s World Environment Day theme focuses on ecosystem restoration. To restore ecosystems, we need to reclaim our food systems and dismantle corporate control. Existing neoliberal policies in food and agriculture destroy the planet. A continuation and even strengthening of these pro-business policies—a clear direction which the UNFSS is taking—means further ecosystem destruction. In contrast, the People’s Summit will serve as a venue to tackle the pro-people and pro-planet transformation of our food systems – just, equitable, healthy, and sustainable,” said Razan Zuayter, co-chairperson of the People’s Coalition on Food Sovereignty (PCFS).

Sarojeni Rengam, PAN Asia Pacific (PANAP) executive director, said that the GPS is a push back against corporate capture, exemplified by the strategic partnership between the UN and World Economic Forum, and the #ToxicAlliance between the Food and Agriculture Organization (FAO) and CropLife International, the industry association of the world’s leading pesticide manufacturers. “We will not take the dominance of corporate interests over public policy spaces sitting down. The People’s Summit is a call to arms against corporatization of food systems, wherein a handful of corporations control land and productive resources and the way we produce our food, with harmful techno-fixes that have long been discredited. At the heart of genuine food systems transformation is the right to food, people’s food sovereignty and agroecology—all of which the UNFSS leaves out,” Rengam said.

The People’s Summit is composed primarily of movements of landless peasants, agricultural workers, fisherfolk, indigenous people, rural women and youth—or small food producers who produce 70% of the world’s food, yet remain among the world’s poorest and food insecure.

“The issue of landlessness and land grabbing is not in the agenda of the UNFSS. Nowhere in its so-called Action Tracks do discussions highlight critical trends such as on land concentration and reconcentration in the hands of big agribusiness firms and their network of local landlords and compradors, nor on the massive displacement of rural communities to give way to big private investments and large development projects,” said Chennaiah Poguri, chairperson of the Asian Peasant Coalition (APC).

Jiten Yumnan of the International Indigenous People’s Movement for Self Determination and Liberation (IPMSDL) added, “The Summit fails to address the massive human rights violations inflicted by such development aggression projects, which cause the landlessness and impoverishment of the rural peoples especially Indigenous Peoples. Our assertion of our right to self-determination, our ways of life, and our indigenous food systems is often met with criminalization and vilification, even murder. Land grabbing corporations, including their funders and backing governments, should be held accountable – yet nowhere can we hear this in the conversations of the UNFSS.”

“The UNFSS often champions the youth. But what future will we have when local agriculture has been destroyed by the influx of imported food? What future will we have when lands have been taken away or rainforests cleared for corporate monocultures that serve not domestic food needs, but ‘global value chains’ that value profit, instead of the right to food, above all?” said Rahmat Hidayat of the Youth for Food Sovereignty.

“While many heads of state have confirmed the need for strong action to promote sustainable food systems and halt climate change and biodiversity loss, in practice, unsustainable livestock farming and other forms of industrial food production are still heavily incentivized by governments. A growing number of public-private partnerships and initiatives promoting blended finance, make public institutions even more dependent on corporate funding. As a result, corporations have more influence over the decisions that many institutions make. For instance, the UNFSS promises to have a direct influence in the outcomes, leading to policy decisions that focus on protecting private interests rather than urgent and effective action to defend food sovereignty, protect biodiversity and tackle the climate emergency,” said Isis Alvarez, campaign coordinator of the Global Forest Coalition.

“There is zero evidence that MNCs will suddenly grow a conscience and stop doing what’s in their interest of ever-growing profits. It will be naive to think that their engagement in this summit will lead to just and equitable food systems for women in Asia and the Pacific,” said Marjo Busto, Programme Officer of the Asia Pacific Forum on Women, Law and Development.

The Global People’s Summit on Food Systems will gather the broadest number of rural peoples, people’s organizations, CSOs, and advocates to draw up a Declaration for a radical transformation of the current food regimes towards just, equitable, and sustainable food systems. The People’s Summit will also develop a People’s Action Plan – its major outcome – to realize our goal. This Action Plan will be based on outcomes of national, regional, and sectoral summits, as well as thematic workshops, to be held in different countries and regions starting this month.

The GPS main event will be a three-day Plenary in September 2021, both virtually and on-ground. Each day of the Plenary will be hosted by a Street Conference in one of the participating countries. On the fourth day, the Plenary will end with a coordinated Global Day of Action for Just, Equitable, and Sustainable Food Systems to highlight the people’s role and engagement.

The People’s Summit is being organized by:

Chandigarh to appreciate those who got Covid-19 jab

What makes Yogi Adityanath a superstar campaigner in Bengal