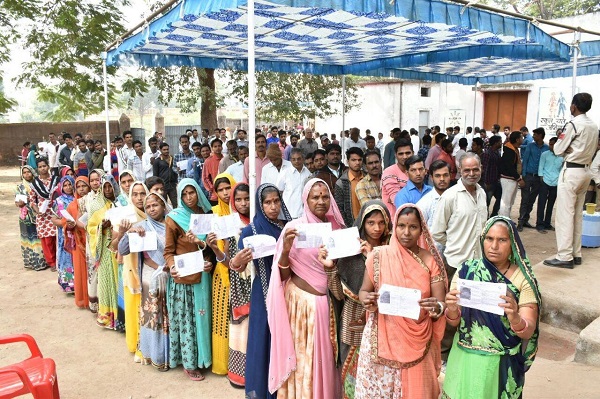 Bhopal,  On October 21, Jhabua electorate would exercise its franchise for the third time in 11 months. Their choice at both previous polls – for Vidhan Sabha in November and for Lok Sabha in May – fell on the same person, the BJP’s Guman Singh Damor, a former chief engineer of the Public Health Engineering Department.

BJP asked him to honour the larger mandate for Ratlam-Jhabua parliamentary seat. Congress has had a long winning record in the constituency reserved for scheduled tribes. During the past few years it has paid for the chronic factionalism.

In the last year’s assembly polls Congress rebel Xavier Meda garnered a substantial share of 35,943 votes paving the way for the BJP’s victory in Jhabua by over 10,000 votes.

Meda, a former MLA from the constituency who belongs to Jyotiraditya faction, has returned to the party and was roped in to propose the name of Kantilal Bhuria. Meda, who was himself an aspirant for the Congress ticket, has also been asked to lead the campaign. What has been offered as quid pro quo is unknown.

What makes the by-election for Jhabua so crucial for both Congress and BJP?

Out of 230 Assembly seats, the Congress has 114 seats. Winning the by-election will not give Congress majority but it would reach the halfway mark in the House. The BJP with 108 seats may not cause any major difference to the composition of the House, but it is leaving no stone unturned to retain it because it can’t afford to squander the advantage of having won both the assembly and Lok Sabha seats.

BJP has gambled on inexperienced Bhanu Bhuria, 36, while overlooking the claims of Kalyan Singh Damor. Kalyan Singh has rebelled against the party to remain in fray as an independent candidate. Kalyan Singh has also been close to the party MP, GS Damor and another former state minister Ranjana Baghel and union minister Faggan Singh Kulaste.

BJP has been underlining young Bhanu’s clean image. Former chief minister Shivraj Singh Chouhan accompanied Bhanu when he filed his papers. He is going to camp in Jhabua and hold road shows and meetings from October 14 to 18. State BJP chief Rakesh Singh is is also going to stay in Jhabua for 10 days. BJP organisational general secretary for the state Suhas Bhagat is already camping in Jhabua.

Union Ministers from MP Narendra Tomar, Thawar Chand Gehlot and Faggan Singh Kulsate are scheduled to visit Jhabua to canvass. BJP had won Jhabua seat twice consecutively since 2013 due to infighting in Congress.

Kamal Nath has visited Jhabua four times in 40 days and has continuously promised to turn the constituency into a modern region with all infrastructural facilities in 15 months. What the BJP could not do in its 15 years rule in MP, we are going to do that in just 15 months, Kamal Nath has promised the people.

The state government has waived off the farmers’ loan up to Rs 2 lakh in entire Jhabua constituency. Kamal Nath has promised growth on the lines of Chhindwara. Pollsters are, however, sceptical about how well the message is being received in the predominantly tribal area that knows little about Chhindwara pattern.

In 2013, Congress rebel candidate Kalavati Bhuria, niece of Kantilal fought against her party official candidate Meda and lost. She got good number of votes and had cleared way for BJP’s win then.

The BJP then paid back the Congress and Kantilal’s family in the same coin. Meda rebelled against Congress candidate and helped the BJP to retain the seat last year.