HOME ‘India is not for Sale’: Bhumi Adhikar Andolan calls in unison against... 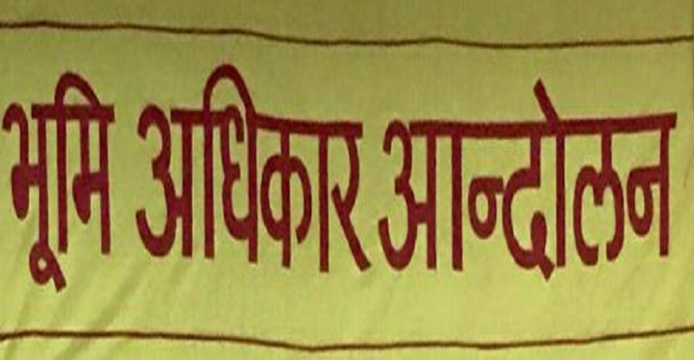 New Delhi(Samaj Weekly): Bhumi Adhikar Andolan organized a national level online conference on 12th July with about 150 representatives of people’s movement groups. Speaking with their experiences of working with people, they shared the challenges faced by the common working people of the country and expressed concern on the government’s non-collaborative nature in deciding what is good for the country.

In the name of rhetorical development, the Union government has made natural resources a commodity for exploitation. Even in the times of a humanitarian crisis of this magnitude, there has not been focus on public health or social security but on the indiscriminate sale of natural resources to corporate groups.

The sammelan focused on the plight of working caste-class groups who still continue to suffer immensely due to the negligence of state and union governments. The attack on social activists and progressive groups during this period was also condemned. It has been amply clear that this regime is against the interests of common people and does not care about them. In the time of a pandemic, when people are unable to come together and express their opposition, the imposition of various amendments and ordinances in the management and control of natural resources points to their high-handedness in the matter.

In the 4 sessions, discussions were done on the changes in labour laws, challenges faced by migrant workers on their lives and livelihoods, commercialization of coal mining, negative impacts on agriculture, changes introduced to dilute environment conservation efforts through the introduction of EIA Notification 2020 and the virtual decimation of the processes of social impact assessment and taking consent for land acquisition. The increasing attacks on forest dwelling communities by forest departments and atrocities by police as a widely used method of state violence also was a major cause for worry. Opposition to the government policies has been criminalized, and it was realized that a united opposition must be built for democratic movements to take shape. Many speakers focused on the fact that the union government has used this pandemic as an excuse to impose anti-people laws and hand over public resources to private players rather than take efforts to improve the conditions of people.

While the government won elections with the slogans that they would not let the resources of the country get out, it is working overtimes to do the opposite and sell out natural resources to national and international capitalist groups. Hence, a resolution was passed to oppose these policies and build democratic movements and proposed strategies for the same.

The conference adopted these resolutions unanimously:

2.      On 23rd July, a day of nationwide protest would be organized at the block/tehsil level where national issues would be raised along with local and regional issues.

3.      A campaign for land reforms would be launched which would independently evolve as a peoples movement in the future.

4.      People would be collectively mobilized to demand royalties for the use of natural resources as their rightful due.

5.      Decentralisation would be the key to develop these new social movements, where people would be organized at the local level to effectively organize themselves

6.      In the struggle for natural resources, space would be created for all oppressed communities to come together.

7.       Peoples’ movement groups would collectively come together to oppose changes being introduced by the government in labour laws

8.      The government would be pressured to take adequate steps to solve the crisis faced by migrant workers on their lives and livelihoods