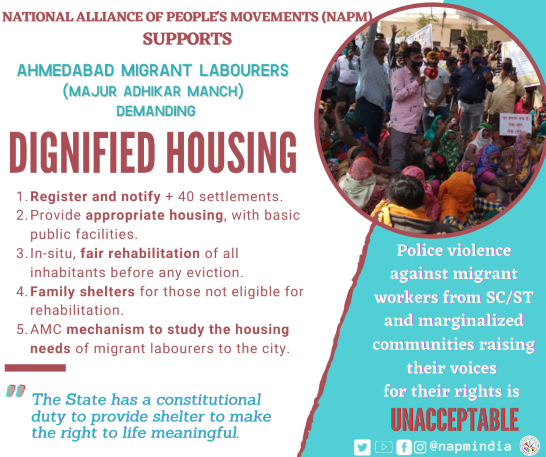 Ahmedabad, (Samaj Weekly): The past year has exposed the dire situation of migrant workers across India, who continue to work in precarious conditions. On 15th February, 2021, almost 1000 migrant labourers, members of the labour union Majur Adhikar Manch, gathered in Ahmedabad in front of the District Collector’s office, to submit a memorandum asking for immediate action to provide them with dignified housing in the city. The workers had been denied permission to hold the rally, and many were detained by the police in an absurd use of violence by lathi charging a peaceful gathering.

The protestors are seasonal and permanent migrant labourers, many of whom belong to Adivasi, NT, DNT, Dalit and OBC communities from Gujarat and from West Madhya Pradesh and South Rajasthan, who come to Ahmedabad to find work through labour-nakkas. Entire families frequently undertake construction work in a state where a significant amount of the budget is spent on ‘urban development’ and only very little on social security schemes. They also find casual labour, and some are petty vendors. The irregular and unpredictable nature of the work available provides only a minimal income per month for each family, insufficient to cover rent as well as other daily living necessities.

At a conservative estimate based on a study undertaken by Majur Adhikar Manch, there are more than 2300 families of migrant labourers living in 40 squatter settlements in Ahmedabad, providing cheap labour for the needs of the city. These settlements are located on empty plots of land, some of them belonging to private persons, some to the government, including Railways and the Ahmedabad Municipal Corporation (AMC). The settlements have not been recognized as registered slums, in spite of the fact that they are older than a decade, some even two, and in spite of repeated demands from the people. As a result, the AMC is not compelled to ensure basic living facilities, such as running water and electricity. This adds to the already existing health risks, insecurity and risk of accidents. The settlements are periodically demolished, leaving the inhabitants with no living alternative.

Shelters (rain baseras) in the city do not provide accommodation for families and most of the inhabitants of these settlements, especially the many who belong to Adivasi communities, migrated to the city as families. Over the years, multiple representations have been made to the concerned authorities. From 2016 to 2018, letters submitted to the Railways demanded a halt to evictions of construction workers in various bastis in the city. As early as 2012, letters began to be addressed to the Ahmedabad Municipal Commissioner and other concerned authorities, additionally asking for the enumeration of households, an assessment of the needs of seasonal and permanent migrant labourers and of the gap between these and the services provided by the rain baseras. There have been multiple eviction cases as well, some in January 2020, immediately before the beginning of the pandemic, which left migrant workers in a state of abject vulnerability and risk.

The right to shelter is a constitutional right, that the state cannot wash its hands of, leaving thousands of people essential to the functioning and wellbeing of the city destitute and living under constant threat of evictions and insecurity.

(ii)          appropriate housing, with basic public facilities such as running and drinking water, sanitation, electricity and paved roads be provided for the inhabitants of these settlements.

(iii)        no eviction be undertaken without prior just rehabilitation.

(iv)         in-situ, fair rehabilitation of all inhabitants is undertaken before any eviction, and the cut-off date for eligibility for rehabilitation is extended to 31st December 2018.

(v)           family shelters be constructed for those not eligible for rehabilitation, under the Shelter for Urban Homeless (SUH) scheme, responding to the actual needs of the migrant labourers.

(vi)         a mechanism is set up within AMC, to study the housing needs and the gap and enable the provision of dignified housing to migrant labourers to the city.

We stand firm in our conviction that the right to protest and demand basic rights and entitlements where these are not provided cannot be answered with police violence. As various High Courts and the Supreme Court stated in multiple instances, the state has the constitutional duty to provide shelter, thereby making the right to life meaningful, and where this does not take place, it is our duty as civil society and concerned citizens to support those affected by the callousness of the state to make their voices heard and demand their due.

13 highways to be built in north Karnataka: Gadkari

Tara Sutaria had ‘a whale of a time’ in Maldives