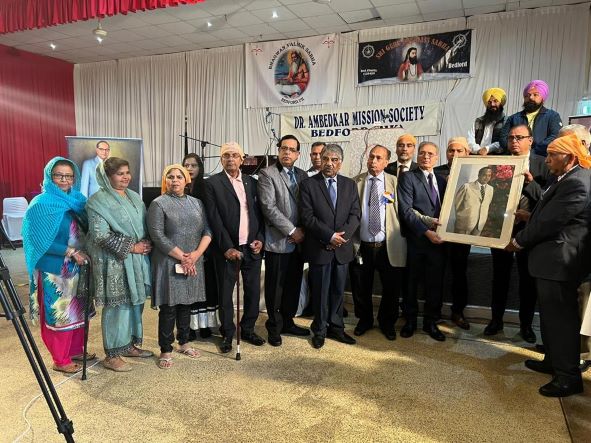 Dr Ambedkar perhaps is the only person in the history of India whose birthday is celebrated all over the world weeks and weeks after his actual birthday  on 14 April. In foreign countries, it is generally celebrated on Sundays as most of the people work during the week. Most of the people are beginning to realise the significance of Dr Ambedkar’s contribution in the matters of equality. In Bedford, 131st birth anniversary was observed as an equality day on Sunday, 8 May at the Shri Guru Ravidass Community Centre. The event was organised jointly by the Ambedkar Mission Society (AMS), Shri Guru Ravidass Sabha (SGRS) and Bhagwan Valmik Sabha (BVS), Bedford. Bedford is the only town in the UK where all the followers of Dr Ambedkar, Guru Ravidass and Bhagwan Valmik have been organising Ambedkar related events for a number of years. They have set up an example for others to bury their petty differences and get united for a common cause. Dr Ambedkar and his life long struggle is the rallying point to show the strength of unity. Giving the background of the equality Day, Arun Kumar, General Secretary, AMS   said that the campaign to declare 14 April, birthday of Babasaheb Dr Ambedkar was first initiated by ambassador Ramesh Chander IFS (Retired) in 2015 when he wrote to the then Indian Foreign Minister, Mrs Sushma Swaraj to recommend to the UN to declare this day as an International Day of Equality. Since then a number of organisations including Chetna Association of Canada and the Federation of Ambedkrite and Buddhist Organisations UK (FABO UK) are raising this issue on various platforms. With the positive engagement of a number of activists with the different levels of the governments, it is a matter of happiness that 14 April, the birth of Dr Ambedkar is being observed as a Day of Equality in Canada, USA, UK and India. Today Dr Ambedkar is widely accepted and recognised as one of the greatest champions of human rights. Hopefully the government of India would also recognise this and send recommendations to the United Nations for declaring 14 April as an International Day of Equality.

Sam Kalyan, President BVS reiterated the significance of unity.  He said that the caste law was passed in the British Parliament as a result of joint campaign by all organisations in the UK and we must continue to work together.

Mohammad Yesin, Bedford Member of Parliament talked about Dr Ambedkar’s contribution to the labour movement. Coming from a humble background, he went to the world renowned universities to get his education that helped him to challenge the society based on high and low. His struggle in life is an inspiration for all of us and we keep on working for the equal and exclusive society. Councillor Mohammed Nawaz, Deputy Speaker, Bedford Borough Council said that Dr Ambedkar’s work on labour movement, education and human rights movement is as significant today as it was during his times. Ram Pal  Rahi, Harish Thapar, Kewal Kalyan, Dhanpat Rattu, Bal Mukand  also spoke. Ajaib singh Jassal, Sukhdev Jassi, Jaswinder Gill, Giani Balvir Singh, Giani Shakti Singh entertained with their sweet vocals.