HOME Dalit Organisations in the UK support the Black Lives Movement and call... 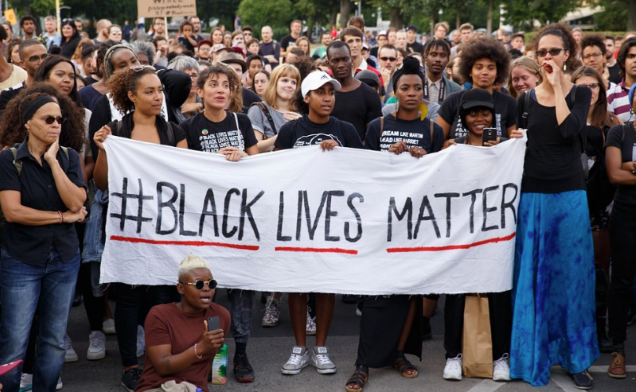 DALIT ORGANISATIONS IN UK STATEMENT OF SOLIDARITY WITH THE BLACK LIVES MATTERS MOVEMENT, & DEMANDS JUSTICE FOR VICTIMS OF RACISM AND CASTE DISCRIMINATION

We understand the pain that the tragic death of George Floyd has caused across the World. Struggling to breathe, his cries for mercy, and leniency were unheeded by the American Police. They stared back expressionlessly at pleading bystanders with no fear, or remorse as they slowly strangled him to death in full public view. His crime – being born a Black minority in a Country that deems Black lives worthless and so dispensable.

Similarly, Dalits, Adivasis, and other minorities also get strangled in South Asia. Human beings labelled ‘low-caste’ and ‘untouchable’ for no other crime then being born in a region where some view them as worthless and dispensable. After thousands of years of oppression within the horrific caste system, Dalits recognise the cry of oppression, and stand in full solidarity with our Black Brothers and Sisters in the United States, the UK and wherever racism manifest itself.

We call on the British Government to recognise the contributions that Black and Minority Ethnic Communities have made to British life, history, economics, and culture. It is time that the history books also reflect our history and contribution, and that steps be taken so that historical wrongs are righted. Statues and monuments of historical racists should be reviewed and consideration given to moving them to museums, whilst consideration given to producing new monuments that reflect
modern day Britain, and modern day Britons.

And finally, the Governments commission on racial inequalities must enforce the legislation introduced to protect victims of caste discrimination here in the UK – failure to do so will only breed further division.

The Anti Caste Discrimination Alliance (ACDA), on behalf of a number of Dalit organisations in the UK has issued a statement in support of the Black Lives Matter movement.  They have expressed solidarity with the protestors across the world following the death of Black African America George Floyd at the hands of the American Police.

They have raised similarities with the oppression that Dalits face within the Caste System across South Asian and other parts in the world, including the UK.  They have called on the UK Government to implement British legislation that was passed to protect victims of caste discrimination.

Following extensive community campaigning from victims, legislation outlawed caste discrimination in the UK in 2013, however since the law was passed it has been waiting for implementation. The legislation has received the full support of the Equality and Human Rights Commission, however the Government decided in 2018 not to implement it (based on a flawed consultation), and powerfully opposition wilfully obstructed and opposed the law for over a decade.

Mr Ravi Kumar, General Secretary of ACDA said: “International condemnation of the brutal death of George Floyd and many other Black Americans has shown the strength of feeling on this matter.  This is a new day, when victims of discrimination will no longer will tolerate racism, sexism, or caste discrimination.”

Mrs Santosh Dass, MBE, Chair of ACDA said: “The new Commission for racial justice must not ignore Caste discrimination – the knee on the necks of people for millennia. The UK Government mustn’t keep burying its head in the sand about this discrimination. They must stand up and stand on the side of victims and sufferers and outlaw Caste discrimination in the UK. No ifs or buts. The law is ready and waiting for implementation”

Mr Jas Ram, from the Guru Ravidass Sabha UK said: “We call on the Government to listen to the Equality and Human Rights Commission’s calls for Caste discrimination to be outlawed in the UK”.

Mr Sam Kalyan, from the Bhagwan Valmik Organisations said: “This Government is not listening to common sense, it is watering down human rights provisions that protect the most marginalised communities and victims in the United Kingdom”.

Mr Arun Kumar, from The Federation of Ambedkarite and Buddhist Organisations UK (FABOUK) said: “If Caste legislation is not enforced, then Caste discrimination cases will carry on raising their ugly head in this country”.

Mr Bhagwant Singh, from the Indian Workers Association Great Britain said: “It’s shameful that the Government has failed sufferers and victims of Caste discrimination in the UK. We need the law to be implemented”

06/08/2018
We use cookies to ensure that we give you the best experience on our website. If you continue to use this site we will assume that you are happy with it.Ok