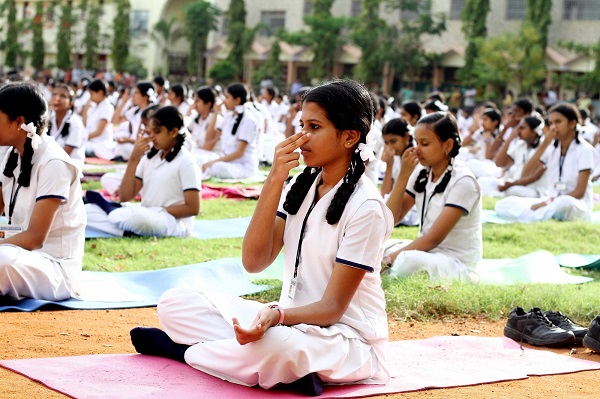 Hyderabad, (Samajweekly) Students of all schools in Telangana will have to practise yoga and meditation for five minutes daily.

They can practice it either in the school assembly or later in the classroom, the School Education Department announced on Wednesday.

Yoga and meditation has been made a part of the academic calendar.

According to the academic calendar for 2022-23 released on Wednesday, all schools affiliated to the state board will have no bag day on every third Saturday in the month.

The schools have been asked to allot one period in a week for communicative skills in English for all classes. This period may include newspaper reading, storytelling, storybook reading and drama/skit etc, in English.

The calendar has laid emphasis on co-curricular subjects – physical and health education, work and computer education, value education and life skills, art and cultural education. The Department has allocated 14 periods per week for primary, nine for upper primary, and eight for high schools. Students will also have informal assessment in these subjects.

According to the calendar, the Formative Assessment (FA)-I exams are to be conducted by July 21 and FA-II by September 5. While the FA-III is to be held by December 21, the FA-IV should be conducted by January 31, 2023 for classes X and February 28 for classes I to IX.

The Summative Assessment (SA)-I exams are scheduled from November 1 to 7. The SA-II for classes I to IX have been scheduled from April 10 to 17, 2023. Pre-final exams for class X will be held before February 28 and the SSC Board Exams in March, 2023.

BJP, Congress clash in Telangana during protest against Agnipath