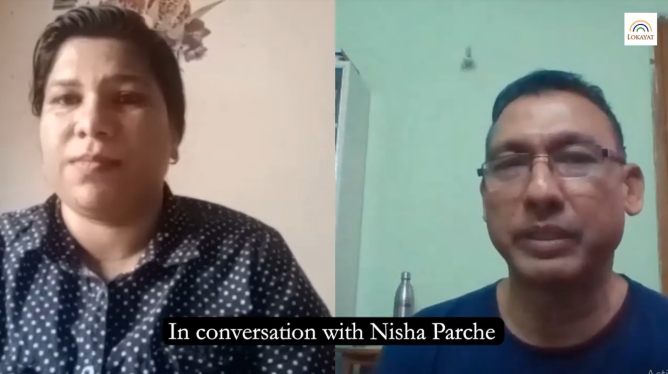 Nisha Jagdish Parche is based in Pune and Chief Executive Manav Mukti Sangram and Director Kranti Jyoti, an organisation working for the socio -economic empowerment of the Bahujan women. She started working in the community of Swachchkars since she was 18 years old. Her aim is to get the community out of the manual scavenging and push them to do other professional work, encourage the young to dream better and through education.

She was also the City President of National Safai Mazdoor Congress, Pune. Unfortunately, the Union was not keen that people leave this sanitation work but reinforcing this on them and that compelled here to resign from the organisation. She completed her graduation working with community only. She was preparing for the UPSC but because of her health problems could not do so. In 2013 she came in touch with Manuski, a Pune based Ambedkarite Buddhist organisation and read Annihilation of Castes, written by Baba Saheb Ambedkar which gave birth to a new Ambedkarite Nisha, who is argumentative and rationalist-humanist.

The conversation was conducted with her on Skype where she shared her views and experiences particularly the issues related to Safai kaamgars i.e sanitation workers and the discrimination that the community face at different level right from the government officials to our own people. Sharing this detailed conversation with Nisha Jagdish Parche on the condition of the Swachchkar families in Pune. Listen the entire conversation at the following link :

HOW TO BUILD A BETTER WORLD

Rasika Dugal: Have always been in awe of singers

21/06/2020
We use cookies to ensure that we give you the best experience on our website. If you continue to use this site we will assume that you are happy with it.Ok