HOME Birmingham Thyagaraja Festival 2020, Sustaining the cultural heritage of India in the... 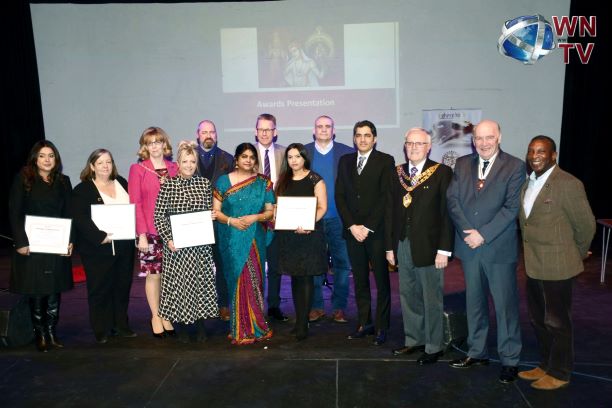 The Birmingham Thyagaraja Festival is the most popular annual festival of Indian Classical Music and Dance in the West Midlands.

The annual festival, organised by ShruthiUK, in its sixth year is a celebration of Indian classical music and dance to commemorate the 173rd birthday of the South Indian Singing Saint & Composer Thyagaraja.  The festival is vibrant and colourful and reminds us of our rich cultural heritage and our respect towards the legendary composer for his contribution to Carnatic Music.

The festival this year featured artistes and professionals, including aspiring children and young adults participating  from all across the UK, and abroad, showcasing their brilliant  and extraordinary talents with great enthusiasm and paid homage to the great Singing Saint.

‘I am delighted to be able to support ShruthiUk and the Birmingham Thyagaraja Festival  in bringing its wonderful Indian Classical Music & Dance to a wider audience for a 6th year, and to celebrate the bringing together of musicians and dancers from all over the world to perform at this event, and am sorry I am not able to be with you on this occasion.  Congratulations and my very best wishes for a successful celebration.’

The BTF 2020 is supported by the Consul General of India in Birmingham and  the West Midlands Combined Authority, in partnership with Touchwood Solihull, Solihull Chamber of Commerce, Solihull Bid, Asian Chambers of Commerce and other premier educational institutions and corporates.

Mr Andy Street, CBE, the Combined Mayor of the West Midlands was the special guest of honour and awarded the inspiring women award to Ms Swarnalaskhmi Ravi.

Every year, at the BTF, in lieu of International Women’s Day honours women achievers at the awards ceremony, recognizes outstanding women, who have made a positive impact and contribution to the society through their skills and passion.

The inspiring women honoured during the BTF 2020 were:

Ms Anjum Khan, Director, Asian Business  Chambers of Commerce, in recognition of her contribution in bringing together business communities  representing diverse cultures and to encourage diversity in leadership.

Ms Anita Chumber, Director Birmingham Awards, for her contribution towards her services to diverse communities through broadcast journalism and inspiring other women as a great role model.

Melanie Palmer, Operational & Strategic Lead, Solihull Bid, in recognition of her contribution towards her wonderful services and commitment to the business community of Solihull and inspiring other women as a great role model.

Professor Clare Mackie, Deputy Vice Chancellor BCU, in recognition of her contribution towards fostering academic excellence, as a strategic leader and great role model and for  her outstanding services to Higher Education.

Ms Swarnalakshmi Ravi is  the president of the children’s parliament in India . she has been an advocate for the specially abled and also for the rights of women and children.

She is a Student pursuing her Master’s degree at Aston University.

The patron and the governing members of ShruthiUK would like to express their heartiest congratulations to all the inspiring women who were honoured this year.

I am once again delighted to be able to support ShruthiUk and the Birmingham Thyagaraja Festival in bringing its wonderful Indian Classical Music & Dance to a wider audience and to celebrate bringing together musicians and dancers from all over the world to perform in Solihull.  My congratulations on your 6th festival and I wish you all the best for a very successful celebration.

“Festivals such as the BTF, strengthens the cultural collaboration between the UK and India, defining India’s culture and its national identity and help to sustain the Indian culture and heritage in the Midlands.

It enables successful partnerships and helps people to connect and relate in a much better way through their culture and traditions.

These classical Indian festival and art forms have evolved and passed on from generation to generation and are still practised with great respect and fervour globally and to wider Communities, making it culturally diverse and distinct. It helps them give the rich experience to learn, enjoy and to unite all of us through the Indian arts.

(ShruthiUK is a South Asian arts organisation based in Solihull and is in its 15th year promoting South Indian classical music and dance in the Midlands and elsewhere in the country.)

The apple doesn’t fall far from the tree: Dhawan